Bios reflect speakers' status at the time of their presentation at the Center for Race and Gender. 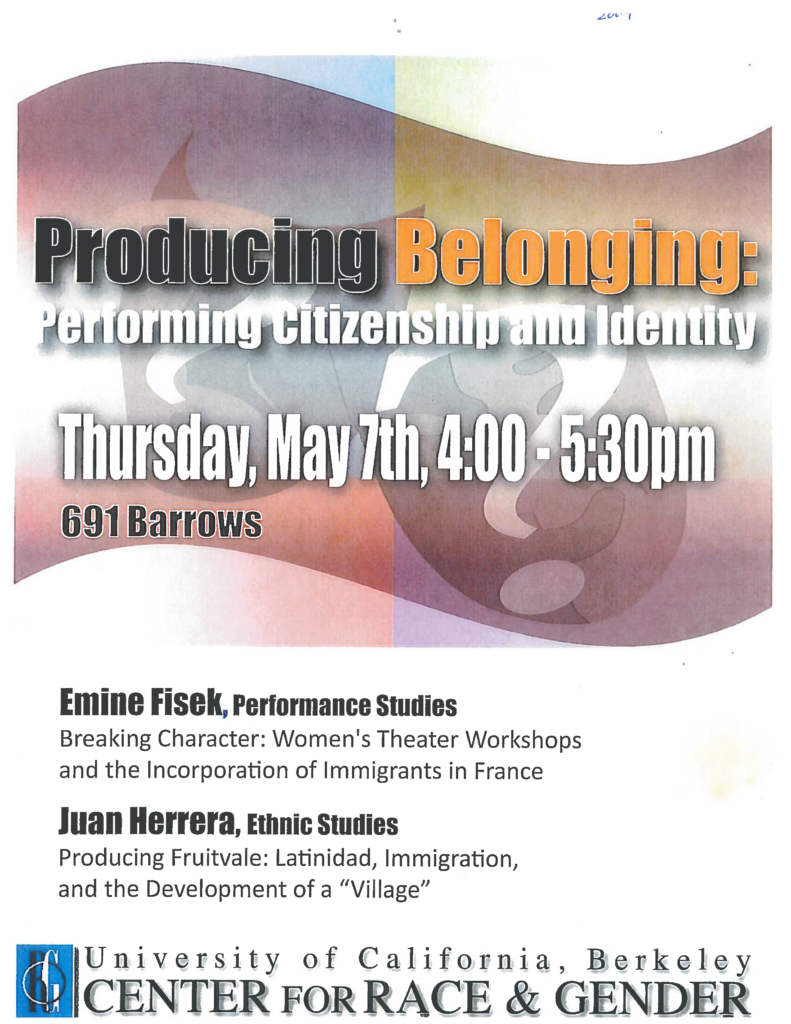 Actor-comedian Richard Pryor may be one of the most present and least understood figures shadowing contemporary American culture. Upon his death in December 2005, the media paid tribute to his legacy with the sort of praise that would have seemed extravagant if it wasn’t so heartfelt and, from the perspective of Pryor’s life, so hard-earned. Yet few scholars have meditated seriously about how he came to create this new style of comedy, or what exactly he started. In “Becoming Richard Pryor: Berkeley, 1971,” I situate the inventiveness of Pryor’s humor within the historical matrix of early-’70s Berkeley. Pryor spent nine productive and experimental months in West Berkeley, living near the intersection of University and McGee, not far from KPFA (where he contributed to the station’s programming) and Mandrake’s (a folk-blues club where he became a regular performer). In Berkeley, his contact with two communities — the freewheeling African-American writers and intellectuals known as the “Black Pack” (among them Ishmael Reed, Cecil Brown, and Claude Brown), and Berkeley’s politicized white counterculture — pushed him to step far outside the boundaries of postwar stand-up comedy, which had been largely inflected with a Jewish sensibility. One might even say that, in Berkeley, Pryor stepped far outside the boundaries of comedy itself, forcing his audience to question why and how they laughed, and flirting with turning comedy into its opposite.

“But Not Despair”: The Political Potential of Comic Conversation Between the Black Subject and the Subject of Terror
Jakeya Caruthers, Stanford University, Anthropology & Education

Many theories of black humor and comic cultural performance focus on the tragicomic, cathartic, subversive, observational, acerbic, and absurdist. I do not wish to discount these theories but to build upon them to examine black humor from a different lens, positing a concept of black humor that emphasizes the comic conversation between the african-american subject and the subject of racial terror. Focusing on the trope of the comic suspended chase, I examine the black aspect of a gray, cross-table laughter which affords an opportunity for african-americans to assert their humanity against narratives of inhumanity (Carpio 2008), an opportunity to stand tall in the face of terror by taking it seriously, and seriously enough to laugh not only at, but with it. This reading of comic conversation suggests a new interpretation of political affect and countenance which posit a closeness and congruity (which are neither grieving nor scornful) that manage to resist complicity. As Toni Morrison notes in Sula, “what [is] taken by outsiders to be slackness, slovenliness or generosity [is] in fact a full recognition of the legitimacy of forces other than good ones.” I argue that the humor that eschews despair does not smack narrowly of the whispered superiority enjoyed in shared subaltern knowing; rather, it is as much and as importantly directed outward as it is deflected inward. It is the moment of gallows humor wherein the would-be executed shares a chuckle with her (un)hooded executioner rather than her audience of comrades. Through an analysis of selected performed/performance texts from different points in black cultural history, I examine the ways these comic interactions present themselves as holographic pedagogies and added configurations of black power.

Jaimee Comstock-Skipp, Near Eastern Studies, traveled to Cairo, Egypt, where she analyzed artistic shifts in 19th-century visual representations of the Sultan Hassan Mosque. She argues that the gradual movement from objective depictions by European colonial artists, from static architectual renderings and paintings that the emphasized structural forms, to more personalized, highly subjective representations of individual figures and scenes from daily life, provides important insight into the evolving relationship between colony and colonizer.

Eva Holt-Rusmore, ISF Studies, traveled to Freetown, the urban capital of the African nation of Sierra Leone. Her two months of field-work involved interviews and participant-observation of female, survivor-victims of the 11-year long, civil war which ran from 1991-2002. Holt-Rusmore seeks to better understand the patterns of social marginalization and reintregration that occur amongst female, post-conflict survivors of violence, genocide and rape.

The Brooklyn, New York based civil rights activist Sonny Carson once noted that the schoolhouses he attended were like prisons, and that the prisons themselves were posing as schoolhouses—metal bars ran down the windows of both. Various authors such as playwright George Bernard Shaw, sociologist Michel Foucault, and even the band Pink Floyd have drawn similar comparisons between institutions of learning and institutions of incarceration.

Professor Daniel Perlstein, Education, evoked these and other powerful images in his discussion about the relationship between institutional structures such as schools and prisons, and how they have contributed in part to shaping the African American male identity.

Perlstein discussed the case of Jeff Fort and Eugene “Bull” Hairston, the two founders of the Blackstone Rangers (later known as the Black P. Stones), a Chicago-based African American gang that would serve as the inspiration and organizational model for other national gangs such as the Crips. Interestingly enough, Fort and Hairston first met one another in a juvenile correctional facility. Perlstein suggests that instead of eradicating their delinquency, their time at  St. Charles actually served to reinforce it. Specifically, it brought them into contact with other similarly disaffected and disenfranchised youth, a phenomenon again, not unlike that of prisons. Additionally, the strict, regimented systems of  discipline and control they were subjected to while at “school” would provide the foundations for their future, organizational enterprise.

According to Nasir, educational researchers to date have limited their inquiries into understanding whether or not possessing a “black identity” is a help or hindrance in school. She argues that such an approach greatly oversimplifies the issue. For one thing, it neglects the role that contexts such as school and society play in shaping individual identity. Furthermore, it ignores the widespread prevalence and influence of social stereotypes. Nasir believes that a more generative approach may be to explore what types of black identies support or hinder schooling, and just as importantly, how they are shaped and influenced by the contexts the students are situated in.

Nasir presented the case of Victor, a student at a Northern California high school campus which had been divided between a sub-section of college-bound students, and those who were allowed to become marginal. The effort to improve the school had created spaces of exception, so that a minority of students enjoyed Advanced Placement coursework and extracurricular activities in the very same building as students who were left to fail. In this way, the academic identities available to students were already filtered by the limited number of academic opportunities provided them by school policy makers.

Victor’s story further exemplifies how students caught at the boundary between these two worlds can be funneled in either direction. Victor began with an academically oriented identity, and was placed into an Advanced Placement history course. However, because his prior classes had not sufficiently prepared him, he failed the class. This failure would eventually prevent him graduating, and lead him to adopt a school adverse social identity.