Bios reflect speakers’ status at the time of their presentation at the Center for Race and Gender. 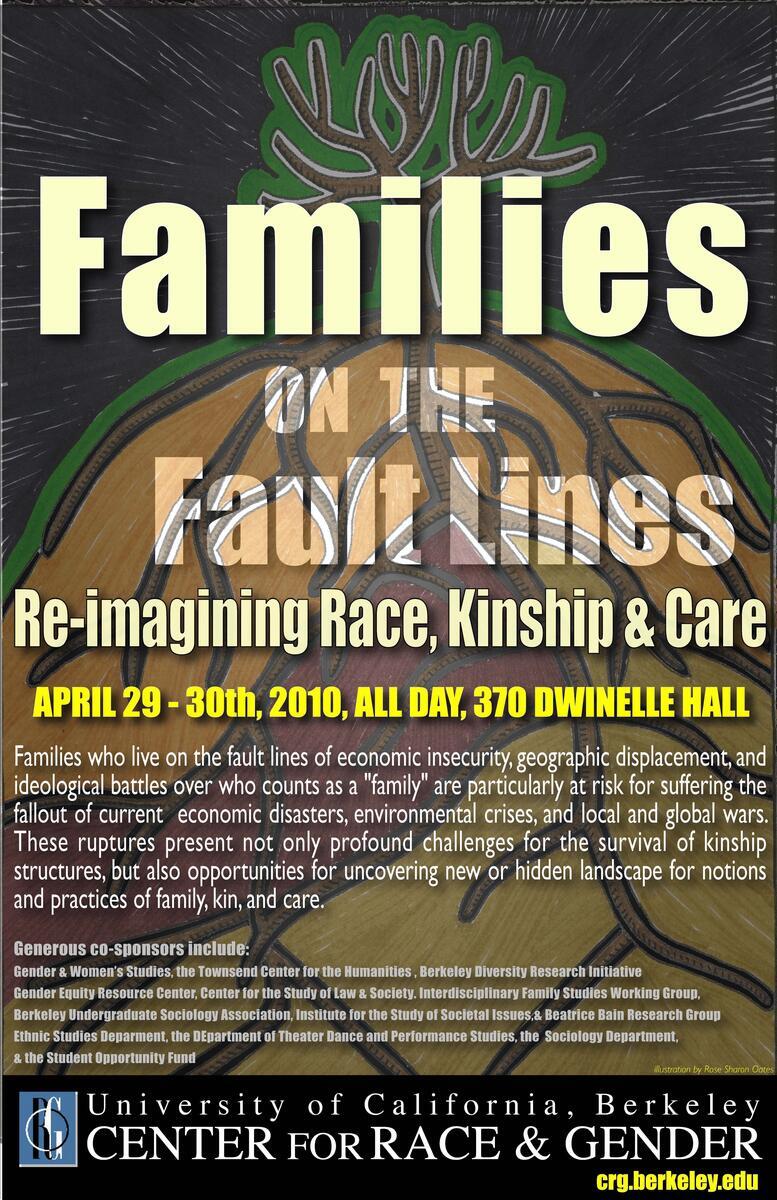 Families who live on the fault lines of economic insecurity, geographic displacement, and ideological battles over who counts as a “family” are particularly at risk for suffering the fallout of current economic disasters, environmental crises, and local and global wars. These ruptures present not only profound challenges for the survival of kinship structures, but also opportunities for uncovering new or hidden landscape for notions and practices of family, kin, and care.

This conference will consider the following issues: 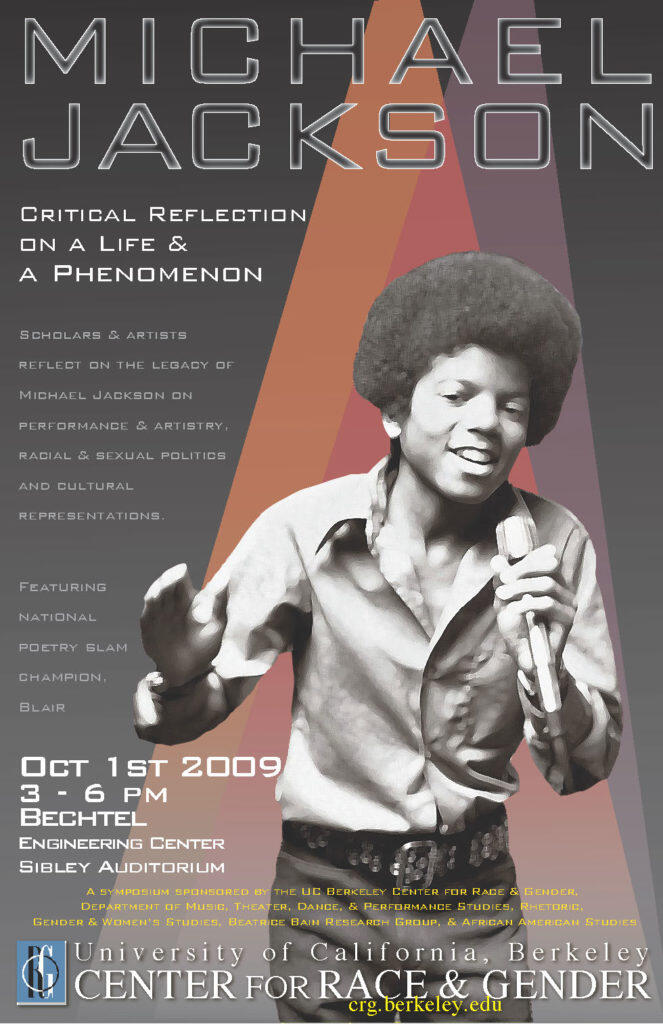 Michael Jackson: Critical Reflection On A Life & A Phenomenon

Panel A: DON’T STOP ‘TIL YOU GET ENOUGH: ARTISTRY, LEGACY, & PERFORMANCE

Profit Without Honor: Michael Jackson In and Out of America, 1984-2009
Regina Arnold, Stanford University

Panel B: MAN IN THE MIRROR: RACE, SEXUALITY, & REPRESENTATION

This is Not It: Recognizing Michael Jackson TM In What Remains
Seth Clark Silberman 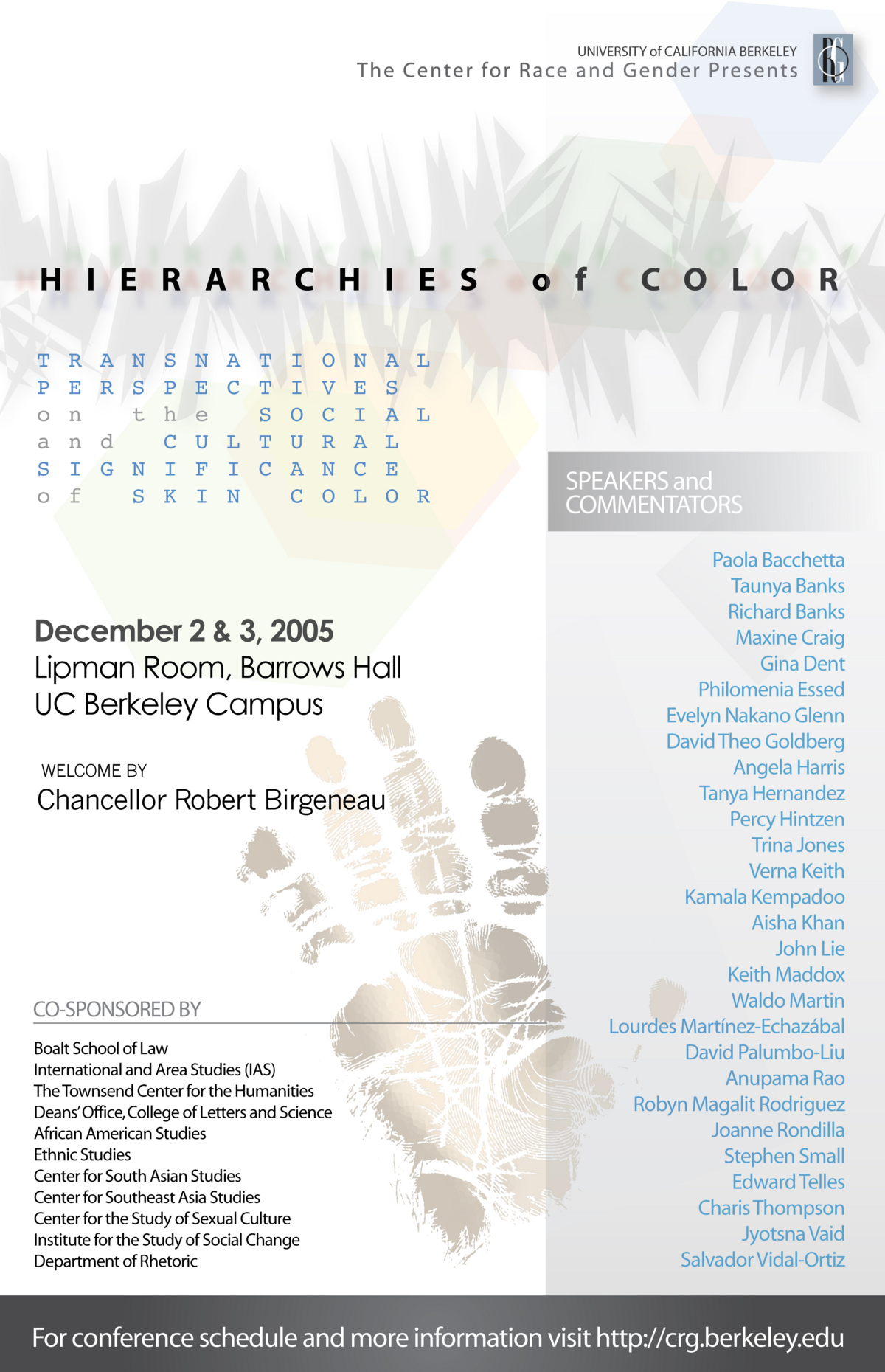 Hierarchies of  Color:  Transnational Perspectives on the Social and Cultural Significance of Skin Color

“Hierarchies of  Color:  Transnational Perspectives on the Social and Cultural Significance of Skin Color”  is a conference designed to bring together scholars to examine the social, cultural, and economic significance of skin color and of social hierarchy based on skin tone.   Through the conference, we seek to explore colorism not in isolation, but in its intersection and entanglements with other forms of social hierarchy based on gender, caste, class, sexuality, and race. We also aim to take an historical comparative approach that uncovers general patterns across societies as well as historical and cultural specificities and differences across cultures.

With the breakdown of traditional racial categories in many areas of the world, we see colorism as a persisting frontier of inter and intra-group relations in the 21st century. Studies have documented discrimination against darker-skinned persons within ethnic and racial communities and of a correlation between skin tone and socio-economic status and achievement in many societies.  Psychological experiments have shown a close relation between perception of an individual’s skin color and judgments about that individual’s intelligence, character, and attractiveness.  The privileging of light skin is also manifested in the widespread use of skin lightening and skin bleaching products,  especially by women between the ages of 16 and 35, despite the serious health risks they pose.

In contrast to race, conceptualized as discrete and fixed (e.g. black/white), skin color is arrayed along a continuum that cross-cuts racial categories.  The intersection of race and color creates complex hierarchies both within and between racial/ethnic communities.  In some societies, such as the U.S., notions of belonging and peoplehood historically have been tied to forms of racial categorization rooted in the discourse and ideology of white supremacy.  Race, understood in terms of mutual exclusivity, serves as the basis for particular and unique forms of segregation maintained through the principle of hypodescent.  In other societies, such as Brazil, notions of belonging and peoplehood are organized around tropes of racial hybridity.  Racial democracy as the organizing principle of the nation state is publicized, legitimized and institutionalized around representations and practices of cross-racial intimacy.  Yet, despite the latter’s legitimacy, the emergent hybridities remain ordered hierarchically around distinctions of color.

This conference is intended to explore these complexities, identifying differences and commonalities across time and space.

Shades of Difference is an exciting anthology that grew out of the 2005 CRG conference, “Hierarchies of Color.” The anthology addresses the widespread but little studied phenomenon of colorism — the preference for lighter skin and the ranking of individual worth according to skin tone. Examining the social and cultural significance of skin color in a broad range of societies and historical periods, this insightful collection looks at how skin color affects people’s opportunities in Latin America, Asia, Africa, and North America.

Is skin color bias distinct from racial bias? How does skin color preference relate to gender, given the association of lightness with desirability and beauty in women? The authors of this volume explore these and other questions as they take a closer look at the role Western-dominated culture and media have played in disseminating the ideal of light skin globally. With its comparative, international focus, this enlightening book will provide innovative insights and expand the dialogue around race and gender in the social sciences, ethnic studies, African American studies, and gender and women’s studies.

Learn more by reviewing the anthology’s table of contents and the introduction, “Economies of Color,” by Angela P. Harris.