Listing of CRG Distinguished Guest Lectures from fall 2015 to spring 2020.

Bios reflect lecturers’ status at the time of their presentation at the Center for Race and Gender. 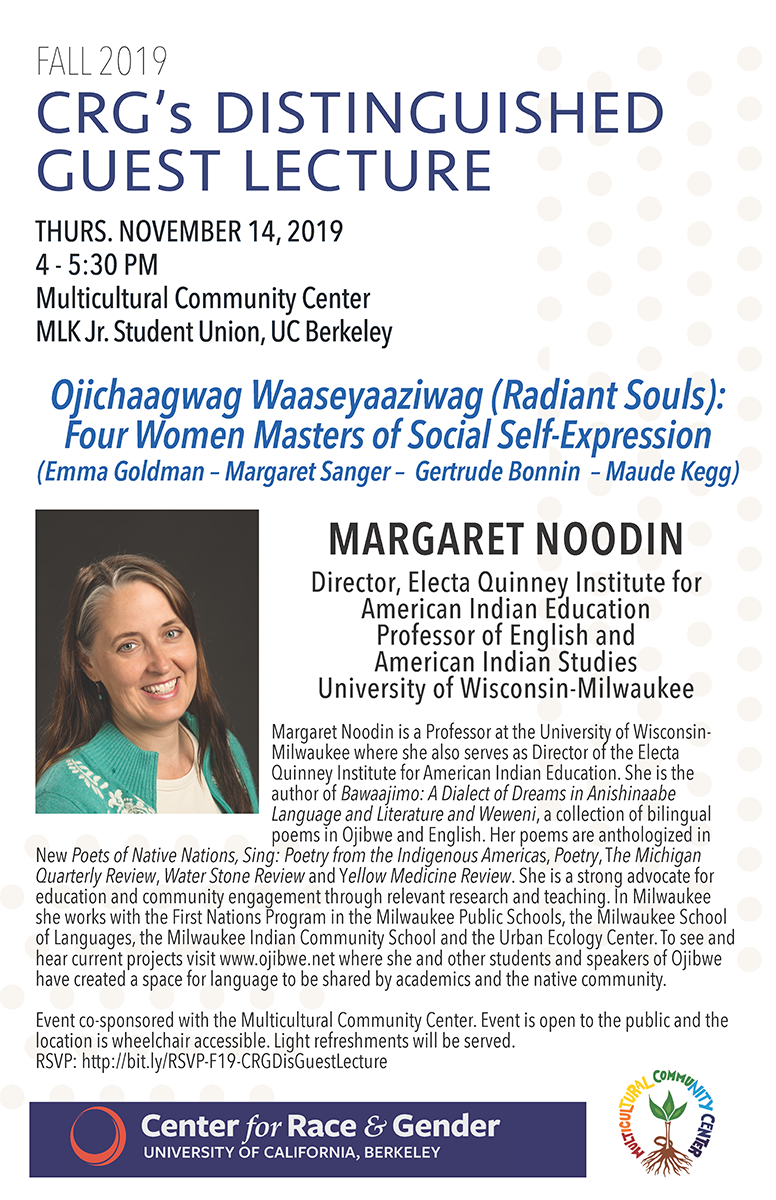 CRG invites our Fall 2019 Distinguished Guest Lecture with Scholar and poet Margaret Noodin of the University of Wisconsin-Milwaukee reflects on the writings of Emma Goldman, Margaret Sanger, Gertrude Bonnin and Maude Klegg through an Anishinaabowin framework.

Margaret Noodin is a Professor at the University of Wisconsin-Milwaukee where she also serves as Director of the Electa Quinney Institute for American Indian Education. She is the author of Bawaajimo: A Dialect of Dreams in Anishinaabe Language and Literature and Weweni, a collection of bilingual poems in Ojibwe and English. Her poems are anthologized in New Poets of Native Nations, Sing: Poetry from the Indigenous Americas, Poetry, The Michigan Quarterly Review, Water Stone Review and Yellow Medicine Review. She is a strong advocate for education and community engagement through relevant research and teaching. In Milwaukee she works with the First Nations Program in the Milwaukee Public Schools, the Milwaukee School of Languages, the Milwaukee Indian Community School and the Urban Ecology Center. To see and hear current projects visit www.ojibwe.net where she and other students and speakers of Ojibwe have created a space for language to be shared by academics and the native community.

In collaboration with the Multicultural Community Center (MCC) and the Designated Emphasis in Indigenous Language Revitalization. 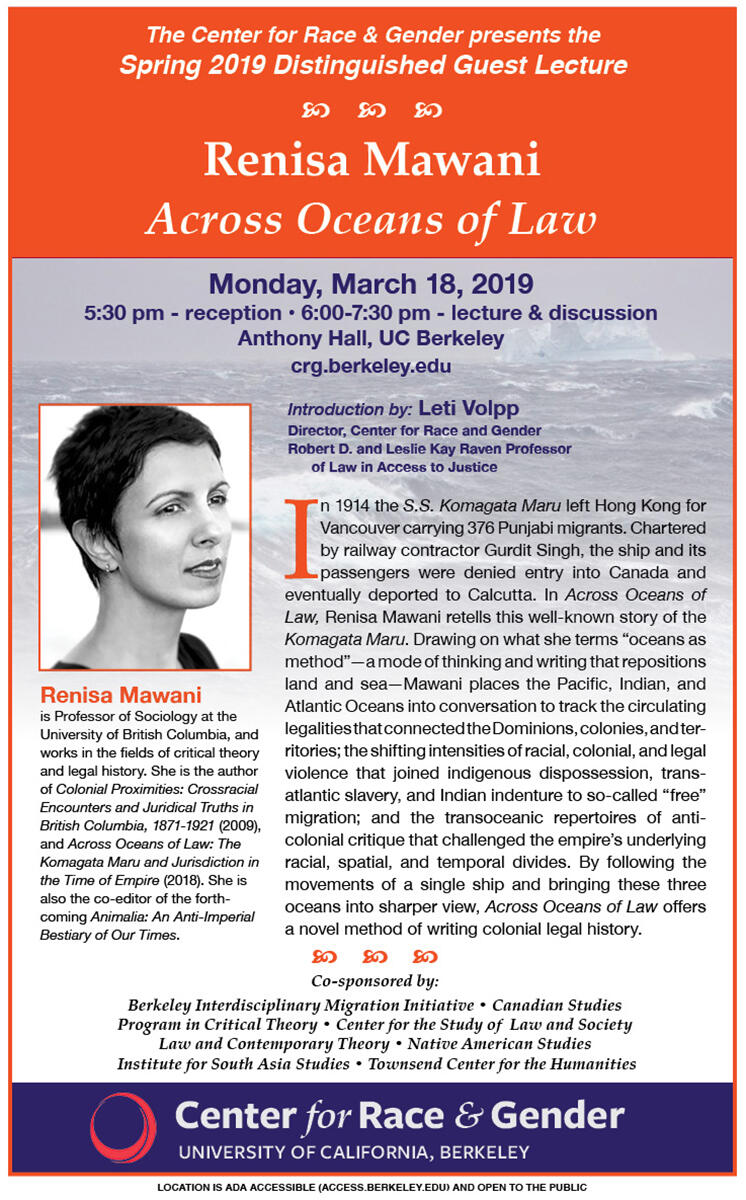 Across Oceans of Law

"Across Oceans of Law" with Renisa Mawani

The Center for Race and Gender presents the Spring 2019 Distinguished Guest Lecture with Renisa Mawani, Professor of Sociology, University of British Columbia.

In 1914 the S.S. Komagata Maru left Hong Kong for Vancouver carrying 376 Punjabi migrants. Chartered by railway contractor Gurdit Singh, the ship and its passengers were denied entry into Canada and eventually deported to Calcutta. In Across Oceans of Law Renisa Mawani retells this well-known story of the Komagata Maru. Drawing on what she terms “oceans as method”—a mode of thinking and writing that repositions land and sea—Mawani places the Pacific, Indian, and Atlantic Oceans into conversation to track the circulating legalities that connected the Dominions, colonies, and territories; the shifting intensities of racial, colonial, and legal violence that joined indigenous dispossession, transatlantic slavery, and Indian indenture to so-called “free” migration; and the transoceanic repertoires of anticolonial critique that challenged the empire’s underlying racial, spatial, and temporal divides. By following the movements of a single ship and bringing these three oceans into sharper view, Across Oceans of Law offers a novel method of writing colonial legal history.

Introduction by Leti Volpp, Director, Center for Race and Gender; Robert D. and Leslie Kay Raven Professor of Law in Access to Justice

Renisa Mawani is Professor of Sociology at the University of British Columbia, and works in the fields of critical theory and legal history.  She is the author of Colonial Proximities: Crossracial Encounters and Juridical Truths in British Columbia, 1871-1921(2009), and Across Oceans of Law: The Komagata Maru and Jurisdiction in the Time of Empire(2018).  She is also the co-editor of the forthcoming Animalia: An Anti-Imperial Bestiary of Our Times.

Event co-sponsored by the Berkeley Interdisciplinary Migration Initiative, Canadian Studies, Center for the Study of Law and Society, Program in Critical Theory, Native American Studies, Institute for South Asia Studies, Law and Contemporary Theory, and the Townsend Center for the Humanities. 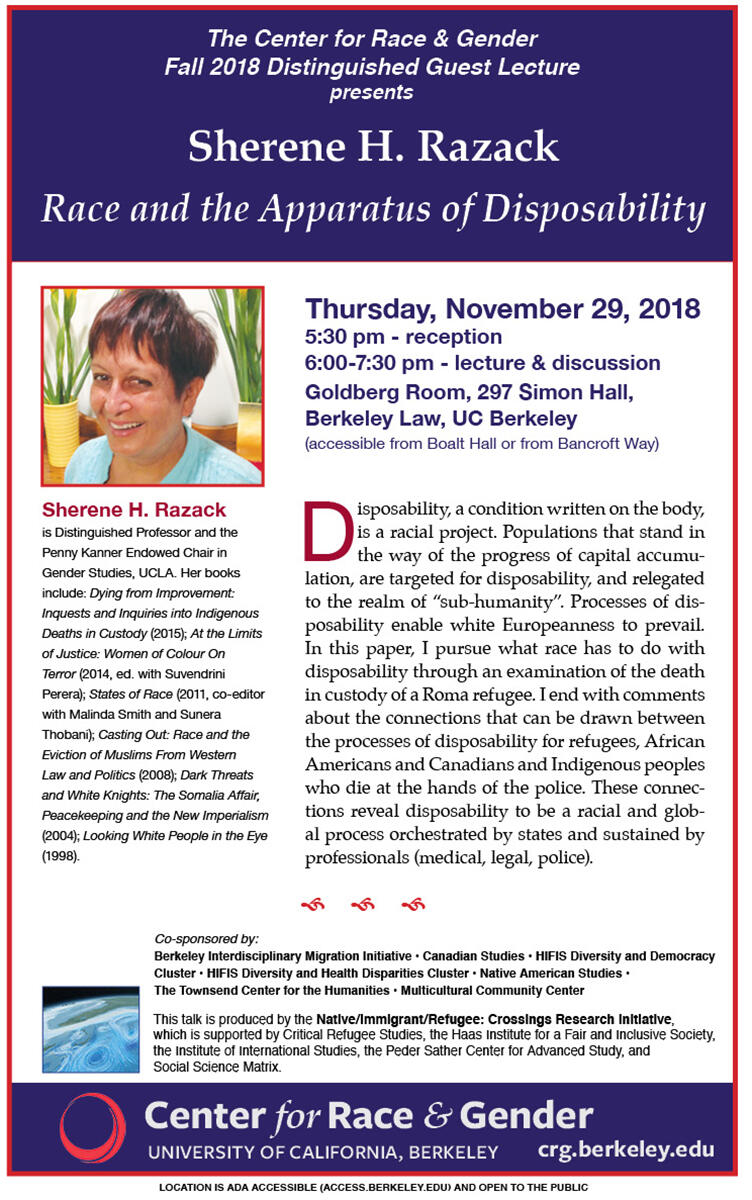 Race and the Apparatus of Disposability

"Race and the Apparatus of Disposability" with Sherene H. Razack

Disposability, a condition written on the body, is a racial project. Populations that stand in the way of the progress of capital accumulation, are targeted for disposability, and relegated to the realm of “sub-humanity.” Processes of disposability enable white Europeanness to prevail. In this paper, I pursue what race has to do with disposability through an examination of the death in custody of a Roma refugee. I show that states have to arrange for the reduction of bodies to human waste and individuals who are a part of the medical and apparatus of disposability (prison guards, medical doctors, psychologists, coroners, lawyers, judges, legislators, and scholars), perform their part in disposability through a professionally and institutionally sustained belief in the lesser value of racialized populations. We can trace the racial along several routes: who is produced as disposable, the infrastructure of disposability, and notably the medical and legal apparatus required to transform the destruction of bodies into authorized killing. In this presentation, I spend most of my time tracing the destruction of the body of a Roma refugee who died in a detention center. I end with comments about the connections that can be drawn between the processes of disposability for refugees, African Americans, Canadians, and Indigenous peoples who die at the hands of the police. These connections reveal disposability to be a racial and global process orchestrated by states and sustained by professionals (medical, legal, police).

Sherene H. Razack is Distinguished Professor and the Penny Kanner Endowed Chair in Gender Studies, UCLA. Her books include: Dying from Improvement: Inquests and Inquiries into Indigenous Deaths in Custody (2015); At the Limits of Justice: Women of Colour On Terror (2014, ed. with Suvendrini Perera); States of Race (2011, co-editor with Malinda Smith and Sunera Thobani); Casting Out: Race and the Eviction of Muslims From Western Law and Politics (2008); Dark Threats and White Knights: The Somalia Affair, Peacekeeping and the New Imperialism (2004); Looking White People in the Eye (1998).

This talk was produced by CRG's Native/Immigrant/Refugee: Crossings Research Initiative, which is supported by Critical Refugee Studies, the Haas Institute for a Fair and Inclusive Society, the Institute of International Studies, the Peder Sather Center for Advanced Study, and Social Science Matrix . 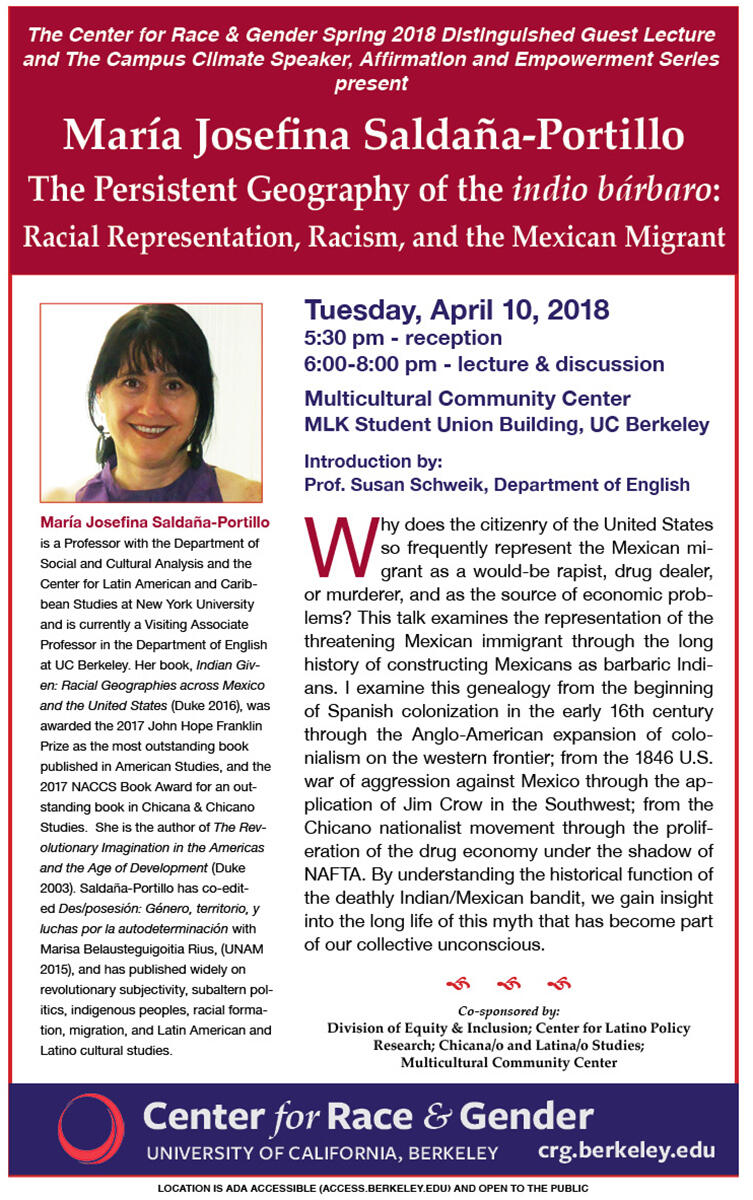 The video above contains images of graphic violence that may not be suitable for some audiences. Viewer discretion is advised.

"The Persistent Geography Of The Indio Bárbaro:  Racial Representation, Racism, And The Mexican Migrant" with María Josefina Saldaña-Portillo

The Center for Race and Gender presents the Spring 2018 Distinguished Guest Lecture and The Campus Climate Speaker, Affirmation and Empowerment Series with Professor María Josefina Saldaña-Portillo.

How does the citizenry of the United States arrive so frequently at the representation of the Mexican migrant as a would-be rapist, drug dealer, or murder? Why is it so easy for politicians to blame hard-working Mexican migrants for all of the collective problems of the working masses? Economists and migration scholars correctly suggest that the denigration of the Mexican immigrants has correlated, historically, to economic downturns in the U.S. economy. Even as the U.S. economy recovers from the 2008 financial crisis and unemployment creeps down to 4%, U.S. workers continue to feel deeply vulnerable in an era of globalization that whittles away at high-paying jobs and stagnates wages. This talk, however, examines the representation of the threatening Mexican immigrant by delving into the long history of constructing Mexicans as barbaric Indians. Professor Saldaña-Portillo examines the genealogy of the indio bárbaro from the beginning of Spanish colonization in the early 16th century through the Anglo-American expansion of colonialism on the western frontier; from the 1846 U.S. war of aggression against Mexico through the application of Jim Crow in the Southwest; from the Chicano nationalist movement through the proliferation of the drug economy under the shadow of NAFTA. By understanding the historical function of the deathly Indian/Mexican bandit, we gain insight into the long life of this myth that goes beyond the economic, or even the political, by seeping into our collective unconscious and even our perception of landscape.

María Josefina Saldaña-Portillois a Professor with the Department of Social and Cultural Analysis and the Center for Latin American and Caribbean Studies at NYU and is currently a Visiting Associate Professor in the Department of English at UC Berkeley. Her book, Indian Given: Racial Geographies across Mexico and the United States (Duke UP 2016), received the 2017 John Hope Franklin Book prize for the most outstanding book published in American Studies for that year, as well as the 2017 NACCS Book Award for an outstanding book in Chicana & Chicano Studies. Indian Given compares racial formation in Mexico and the U.S. from the colonial period to the present through historical, discursive, and textual analysis. Saldaña-Portillo has also co-edited Des/posesión: Género, territorio, y luchas por la autodeterminación with Marisa Belausteguigoitia Rius on indigenous women’s leadership roles in the global struggle to defend their territories (UNAM 2015). In The Revolutionary Imagination in the Americas and the Age of Development, Saldaña-Portillo analyzes the discursive complicity between Mesoamerican revolutionary movements and economic development discourse to elucidate the failure of these movements to understand their constituencies (Duke 2003). She has published over twenty-five articles in U.S. and Latin America on revolutionary subjectivity, subaltern politics, indigenous peoples, racial formation, migration, and Latin American and Latino cultural studies.

Event co-sponsored by the Division of Equity & Inclusion, Multicultural Community Center, Center for Latino Policy Research, Chicana/o and Latina/o Studies, and The Program in Critical Theory. 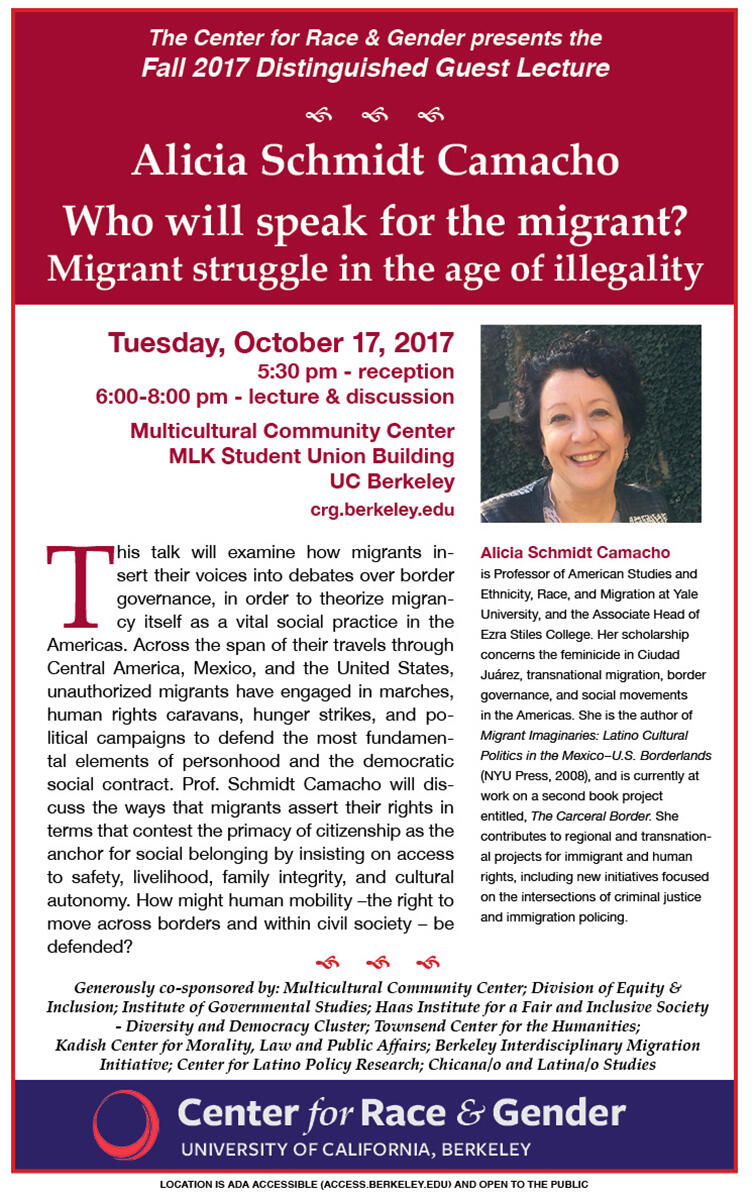 "Who Will Speak For The Migrant? -- Migrant Struggle In The Age Of Illegality" with Alicia Schmidt Camacho

This talk will examine how migrants insert their voices into debates over border governance, in order to theorize migrancy itself as a vital social practice in the Americas. Across the span of their travels through Central America, Mexico, and the United States, unauthorized migrants have engaged in marches, human rights caravans, hunger strikes, and political campaigns to defend the most fundamental elements of personhood and the democratic social contract. I discuss the ways that migrants assert their rights in terms that contest the primacy of citizenship as the anchor for social belonging by insisting on access to safety, livelihood, family integrity, and cultural autonomy. I ask how human mobility –the right to move across borders and within civil society – might be defended.

Alicia Schmidt Camacho is Professor of American Studies and Ethnicity, Race, and Migration at Yale University, and the Associate Head of Ezra Stiles College. Her scholarship concerns the feminicide in Ciudad Juárez, transnational migration, border governance, and social movements in the Americas. She is the author of Migrant Imaginaries: Latino Cultural Politics in the Mexico–U.S. Borderlands (NYU Press, 2008), and is currently at work on a second book project entitled, The Carceral Border. She contributes to regional and transnational projects for immigrant and human rights, including new initiatives focused on the intersections of criminal justice and immigration policing. 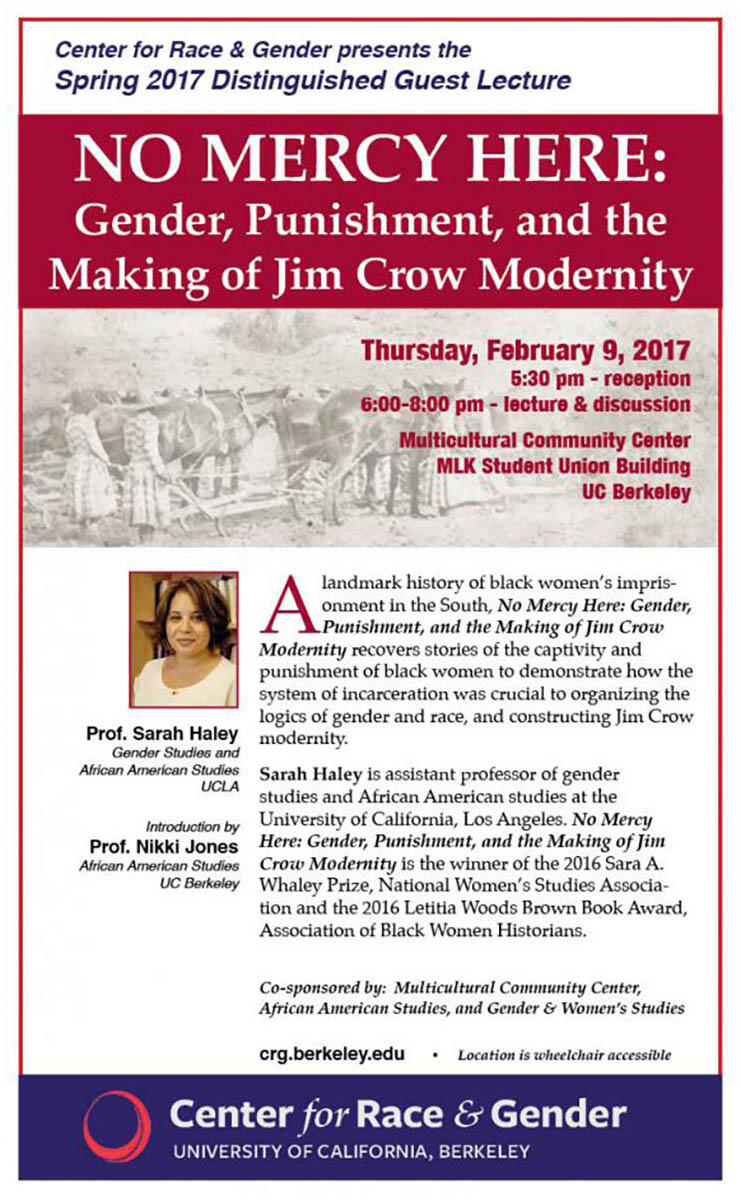 "No Mercy Here: Gender, Punishment, and the Making of Jim Crow Modernity" with Sarah Haley

In the late nineteenth and early twentieth centuries imprisoned black women faced wrenching forms of gendered racial terror and heinous structures of economic exploitation. Subjugated as convict laborers and forced to serve additional time as domestic workers before they were allowed their freedom, black women faced a pitiless system of violence, terror, and debasement. Drawing upon black feminist criticism and a diverse array of archival materials, Sarah Haley uncovers imprisoned women’s brutalization in local, county, and state convict labor systems, while also illuminating the prisoners’ acts of resistance and sabotage, challenging ideologies of racial capitalism and patriarchy and offering alternative conceptions of social and political life.

A landmark history of black women’s imprisonment in the South, No Mercy Here: Gender, Punishment, and the Making of Jim Crow Modernity recovers stories of the captivity and punishment of black women to demonstrate how the system of incarceration was crucial to organizing the logics of gender and race, and constructing Jim Crow modernity.

Sarah Haley is Assistant Professor of Gender Studies and African American studies at the University of California, Los Angeles. No Mercy Here: Gender, Punishment, and the Making of Jim Crow Modernity is the winner of the 2016 Sara A. Whaley Prize, National Women’s Studies Association and the 2016 Letitia Woods Brown Book Award, Association of Black Women Historians.