Listing of lectures from Inaugural Lecture to 2015

Bios reflect lecturers’ status at the time of their presentation at the Center for Race and Gender. 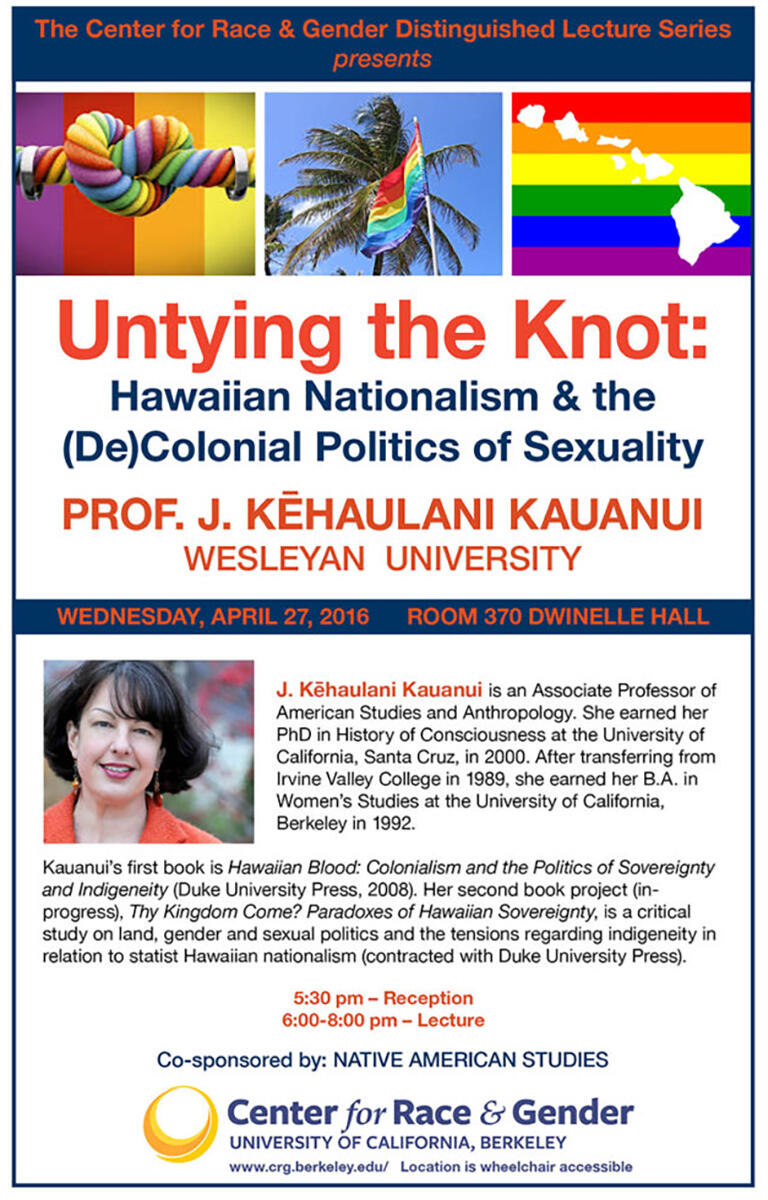 Professor Kauanui is an elected member of the American Antiquarian Society and has held fellowships from: the School of Advanced Research (formerly the School of American Research), the Woodrow Wilson Foundation, Smithsonian Institution, Rockefeller Archives Center, National Science Foundation, Fulbright (Maori Studies, University of Auckland), and Macmillan Brown Centre for Pacific Studies at the University of Canterbury. In Fall 2013, she began her 3-year appointment as an Organization of American Historians (OAH) Distinguished Lecturer. And in Fall 2016, she was nominated to the Distinguished Speakers Bureau of the American Studies Association.

Kauanui’s first book is Hawaiian Blood: Colonialism and the Politics of Sovereignty and Indigeneity (Duke University Press, 2008).   Her second book project (in-progress), Thy Kingdom Come? Paradoxes of Hawaiian Sovereignty, is a critical study on land, gender and sexual politics and the tensions regarding indigeneity in relation to statist Hawaiian nationalism (contracted with Duke University Press).

Kauanui serves as a radio producer for an anarchist politics show called, “Anarchy on Air.” She previously hosted the radio show, “Indigenous Politics,” which aired for seven years and was broadly syndicated. 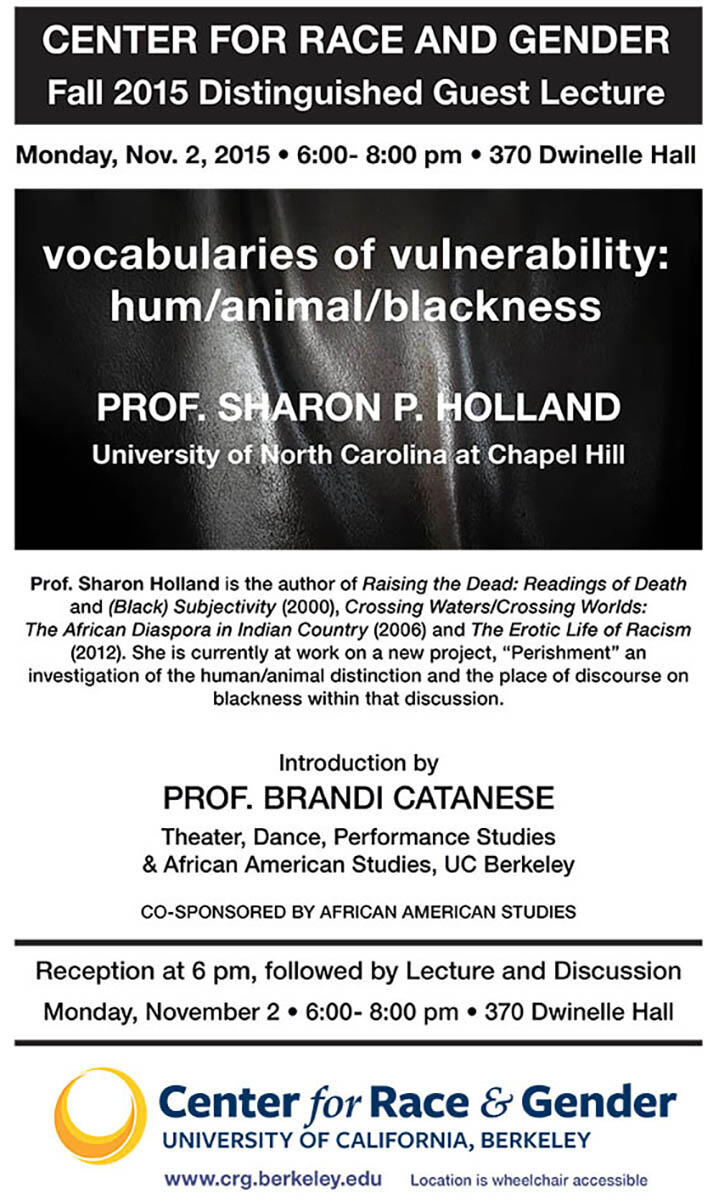 Sharon P. Holland is a graduate of Princeton University (1986) and holds a PhD in English and African American Studies from the University of Michigan, Ann Arbor (1992).  She is the author of RAISING THE DEAD: READINGS OF DEATH AND (BLACK) SUBJECTIVITY (Duke UP, 2000), which won the Lora Romero First Book Prize from the American Studies Association (ASA) in 2002.  She is also co-author of a collection of trans-Atlantic Afro-Native criticism with Professor Tiya Miles (American Culture, UM, Ann Arbor) entitled Crossing Waters/ Crossing Worlds: The African Diaspora in Indian Country (Duke University Press, 2006). Professor Holland is also responsible for bringing a feminist classic, THE QUEEN IS IN THE GARBAGE by Lila Karp to the attention of The Feminist Press for publication (2007).  She is the author of The Erotic Life of Racism (Duke University Press, 2012), a theoretical project that explores the intersection of Critical Race, Feminist, and Queer Theory.  She is also at work on the final draft of another book project entitled simply, “little black girl.”  You can see her work on food, writing and all things equestrian on her blog, http://theprofessorstable.wordpress.com//  She is currently at work on a new project, “Perishment” an investigation of the human/animal distinction and the place of discourse on blackness within that discussion. She is the editor of “south: a scholarly journal” and is presently Professor in and Associate Chair of the Department of American Studies at UNC-Chapel Hill. 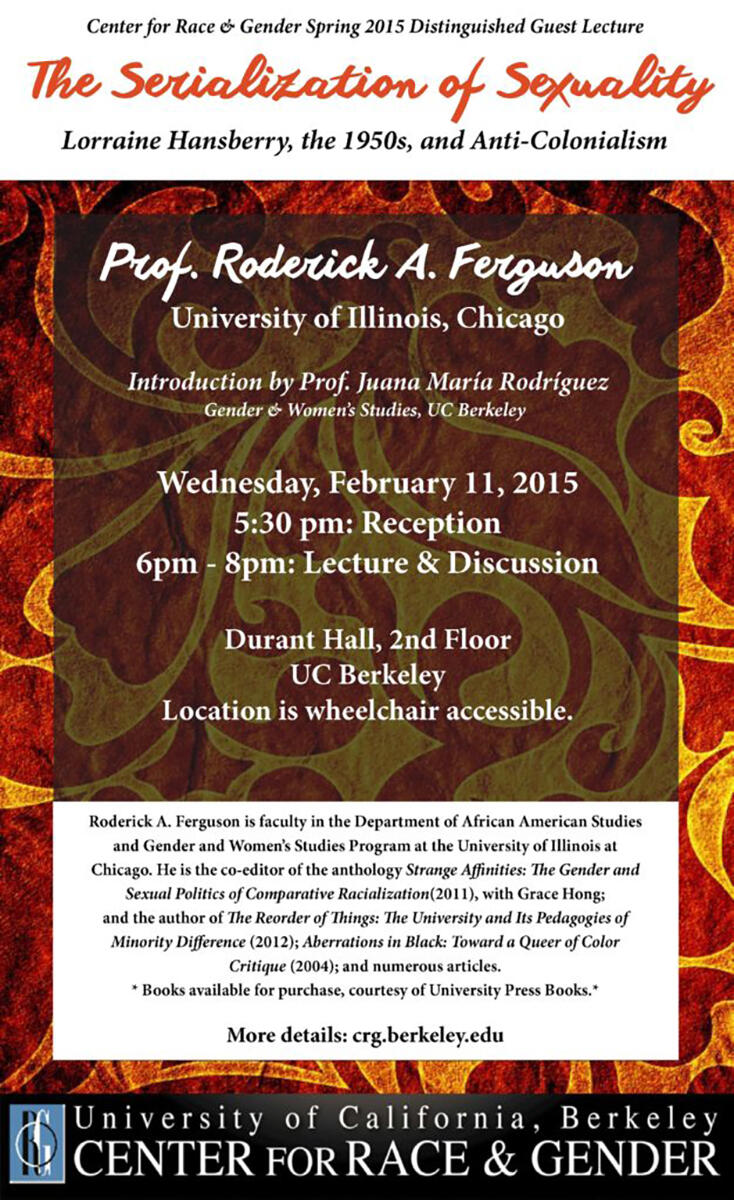 "The Serialization Of Sexuality: Lorraine Hansberry, The 1950s, And Anti-Colonialism" with Roderick A. Ferguson

The Center for Race and Gender presents the Spring 2015 Distinguished Guest Lecture with Professor Roderick A. Ferguson.

Roderick A. Ferguson is faculty in the Department of African American Studies and Gender and Women’s Studies Program at the University of Illinois at Chicago. He is the co-director of the Racialized Body research cluster at UIC. Prior to his appointment at UIC, he was professor of race and critical theory in the Department of American Studies at the University of Minnesota, serving as chair of the department from 2009 to 2012. In the fall of 2013, he was the Old Dominion Visiting Faculty for the Council of the Humanities and the Center for African American Studies at Princeton University. In 2004, he was Scholar in Residence for the “Queer Locations” Seminar at the University of California’s Humanities Research Institute. From 2007 to 2010, he was associate editor of the American Studies Association’s flagship journal American Quarterly. He is the co-editor with Grace Hong of the University of Minnesota Press series, Difference Incorporated. Also with Hong, he is the co-editor of the anthology, Strange Affinities: The Gender and Sexual Politics of Comparative Racialization (2011). In addition, he is the author of The Reorder of Things: The University and Its Pedagogies of Minority Difference (2012), Aberrations in Black: Toward a Queer of Color Critique (2004), and numerous articles. 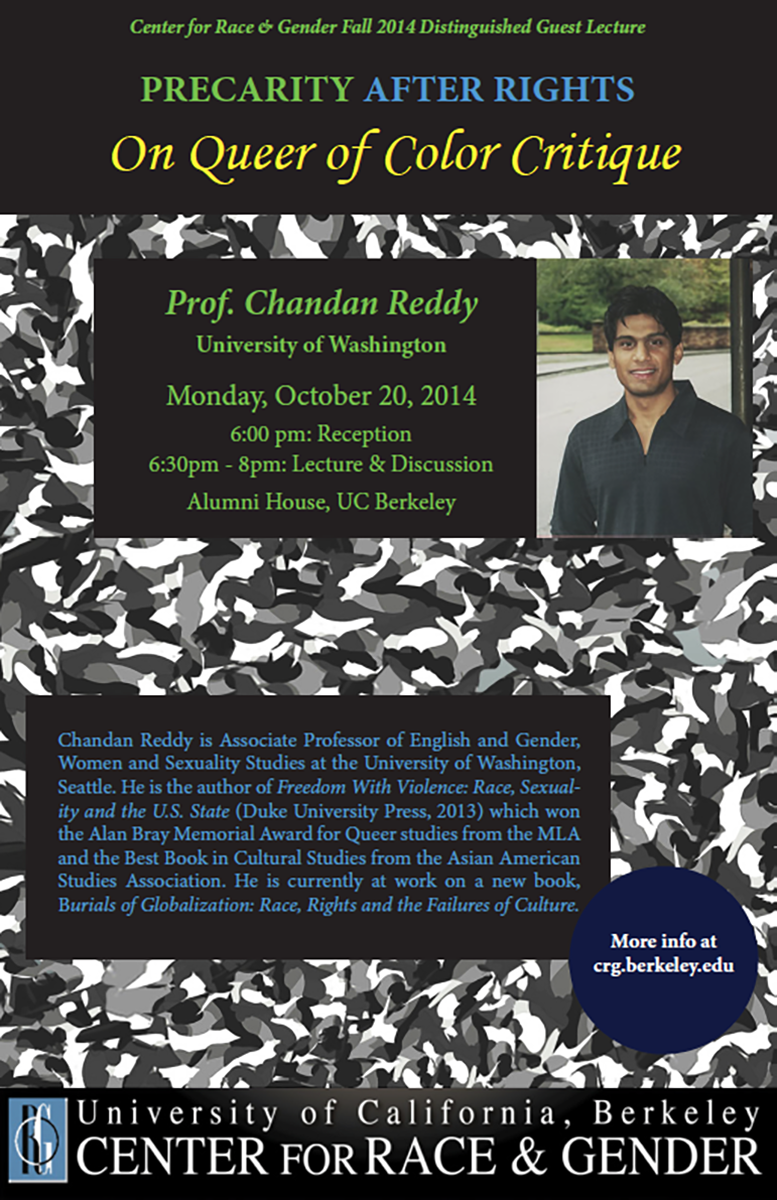 “Precarity After Rights: On Queer Of Color Critique” with Chandan Reddy

The Center for Race and Gender presents the Fall 2014 Distinguished Guest Lecture with Professor Chandan Reddy.

Chandan Reddy is Associate Professor of English and Gender, Women and Sexuality Studies at the University of Washington, Seattle. He is the author of Freedom With Violence: Race, Sexuality and the U.S. State (Duke University Press, 2013) which won the Alan Bray Memorial Award for Queer studies from the MLA and the Best Book in Cultural Studies from the Asian American Studies Association. He is currently at work on a new book, Burials of Globalization: Race, Rights and the Failures. 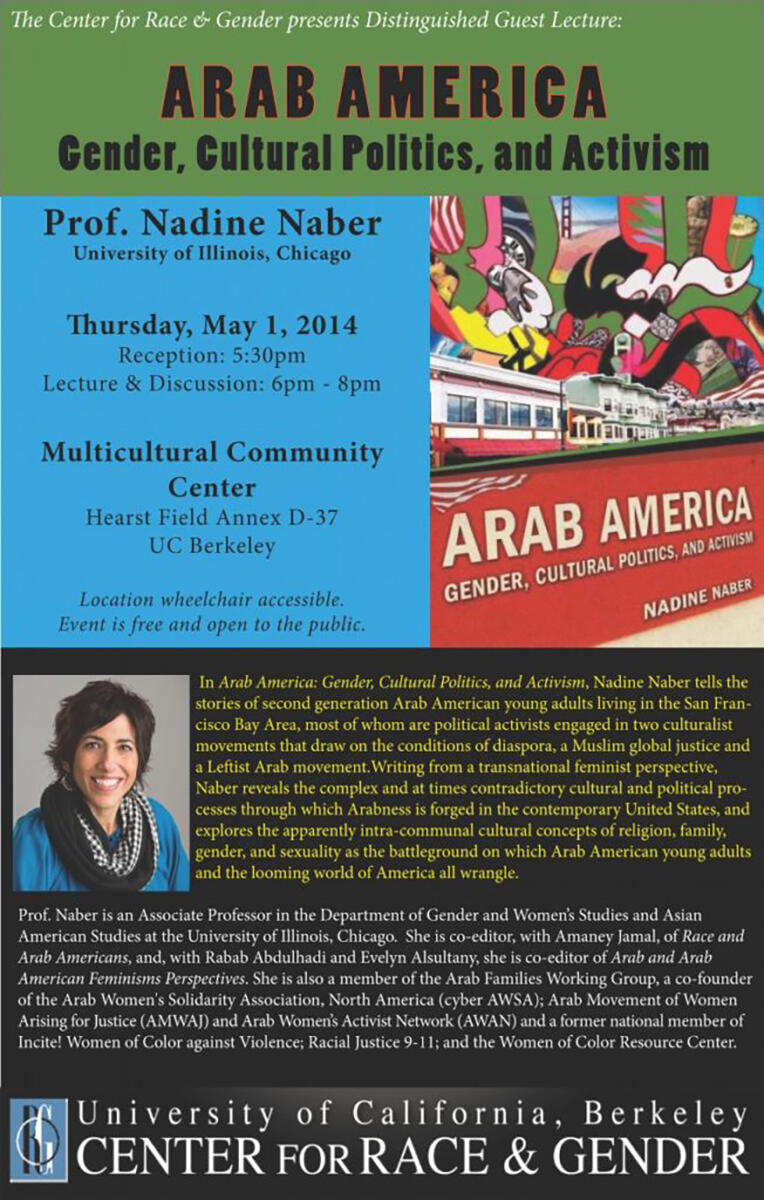 In Arab America: Gender, Cultural Politics, and Activism, Nadine Naber tells the stories of second generation Arab American young adults living in the San Francisco Bay Area, most of whom are political activists engaged in two culturalist movements that draw on the conditions of diaspora, a Muslim global justice and a Leftist Arab movement.Writing from a transnational feminist perspective, Naber reveals the complex and at times contradictory cultural and political processes through which Arabness is forged in the contemporary United States, and explores the apparently intra-communal cultural concepts of religion, family, gender, and sexuality as the battleground on which Arab American young adults and the looming world of America all wrangle. As this struggle continues, these young adults reject Orientalist thought, producing counter-narratives that open up new possibilities for transcending the limitations of Orientalist, imperialist, and conventional nationalist articulations of self, possibilities that ground concepts of religion, family, gender, and sexuality in some of the most urgent issues of our times: immigration politics, racial justice struggles, and U.S. militarism and war.

Professor Nadine Naber received her PhD in Cultural Anthropology at the University of California, Davis. She is an Associate Professor in the Department of Gender and Women’s Studies and Asian American Studies at the University of Illinois, Chicago and a member of the Diaspora Studies Cluster. She came to the University of Illinois from the University of Michigan, Ann Arbor where she co-founded Arab American Studies (an Ethnic Studies unit within the Program in American Culture). She is author of Arab America: Gender, Cultural Politics, and Activism (NYU Press, 2012). She is co-editor, with Amaney Jamal, of Race and Arab Americans (Syracuse University Press, 2008). She is co-editor, with Rabab Abdulhadi and Evelyn Alsultany, of Arab and Arab American Feminisms Perspectives, winner of the Arab American Book Award 2012 (Syracuse University Press, 2010). Nadine is an editorial board of the Middle East Research and Information Project ; an advisory board member of the Expanding Frontiers: Interdisciplinary Approaches to Studies of Women, Gender, and Sexuality book series wit the University of Nebraska Press; and  a member of the Arab Families Working Group.Nadine is co-founder of the Arab Women’s Solidarity Association, North America (cyber AWSA); Arab Movement of Women arising for Justice (AMWAJ) and Arab Women’s Activist Network (AWAN) and a former board member of Incite! Women of Color against Violence; Racial Justice 9-11; and the Women of Color Resource Center. 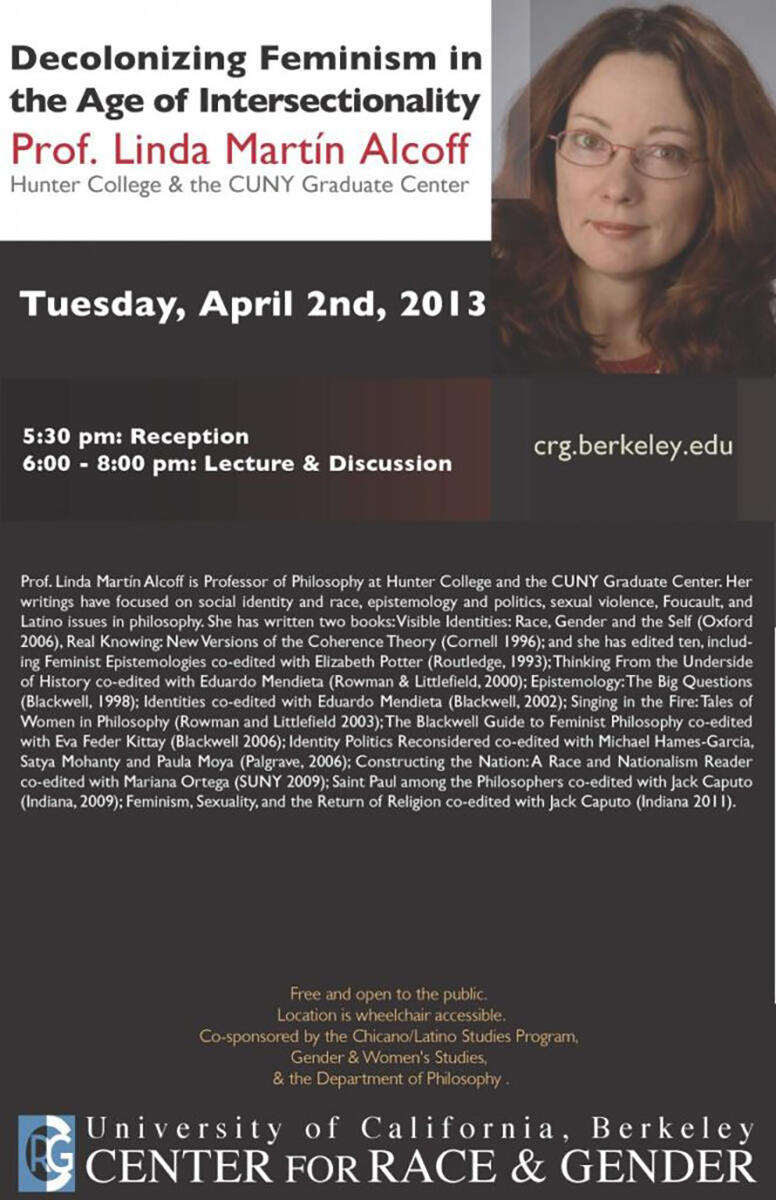 "Decolonizing Feminism In The Age Of Intersectionality" with Linda Martín Alcoff

Linda Martín Alcoff is a Professor of Philosophy at Hunter College and the CUNY Graduate Center. Her writings have focused on social identity and race, epistemology and politics, sexual violence, Foucault, and Latino issues in philosophy. She has written two books: Visible Identities: Race, Gender and the Self (Oxford 2006), Real Knowing: New Versions of the Coherence Theory (Cornell 1996); and she has edited ten, including Feminist Epistemologies co-edited with Elizabeth Potter (Routledge, 1993); Thinking From the Underside of History co-edited with Eduardo Mendieta (Rowman & Littlefield, 2000); Epistemology: The Big Questions (Blackwell, 1998); Identities co-edited with Eduardo Mendieta (Blackwell, 2002); Singing in the Fire: Tales of Women in Philosophy (Rowman and Littlefield 2003); The Blackwell Guide to Feminist Philosophy co-edited with Eva Feder Kittay (Blackwell 2006); Identity Politics Reconsidered co-edited with Michael Hames-Garcia, Satya Mohanty and Paula Moya (Palgrave, 2006); Constructing the Nation: A Race and Nationalism Reader co-edited with Mariana Ortega (SUNY 2009); Saint Paul among the Philosophers co-edited with Jack Caputo (Indiana, 2009); Feminism, Sexuality, and the Return of Religion co-edited with Jack Caputo (Indiana 2011). Learn more.

Event co-sponsored by the Chicano/Latino Studies Program, Gender & Women’s Studies, and the Department of Philosophy. 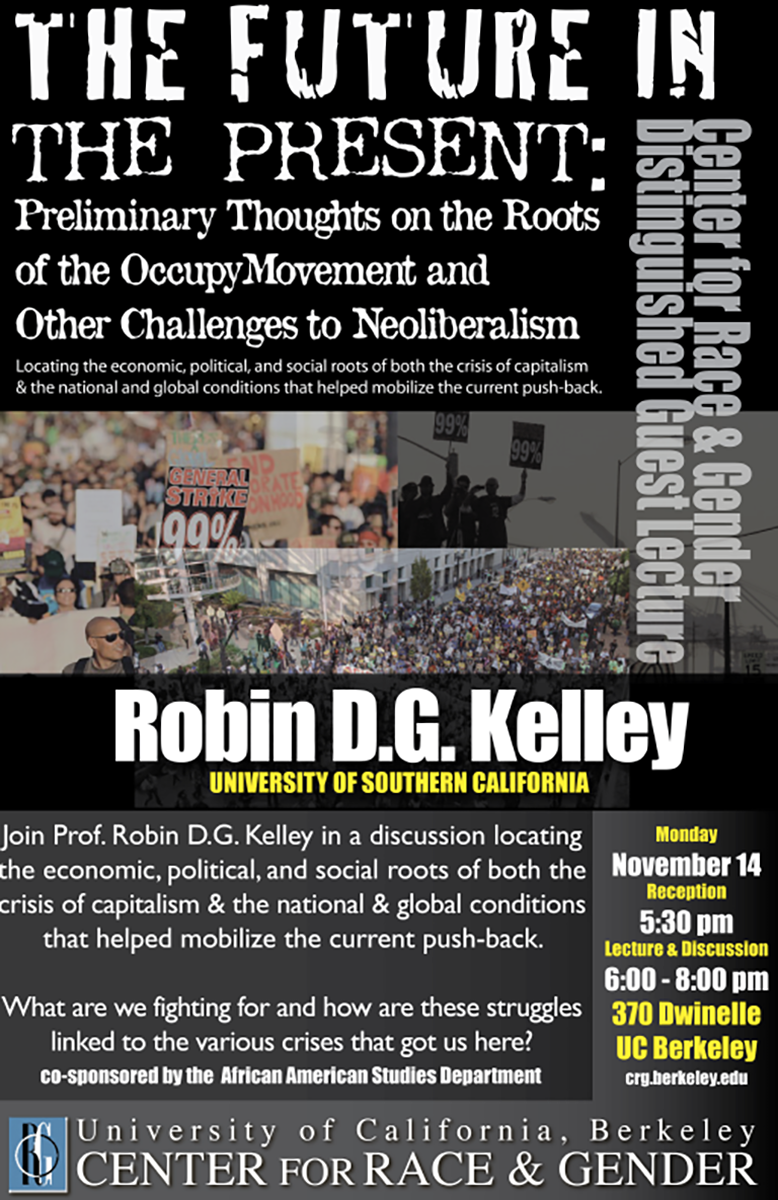 "The Future In The Present: Preliminary Thoughts On The Roots Of The Occupy Movement And Other Challenges To Neoliberalism" with Robin D. G. Kelley

Join Professor Robin D.G. Kelley in a discussion locating the economic, political, and social roots of both the crisis of capitalism and the national and global conditions that helped mobilize the current push-back.  What are we fighting for and how are these struggles linked to the various crises that got us here?

Robin D. G. Kelleyis Professor of American Studies and Ethnicity at the University of Southern California. He is the author of the prize-winning books Thelonious Monk: The Life and Times of an American Original (The Free Press, 2009); Hammer and Hoe: Alabama Communists During the Great Depression (University of North Carolina Press, 1990); Race Rebels: Culture Politics and the Black Working Class (The Free Press, 1994); Yo’ Mama’s DisFunktional!: Fighting the Culture Wars in Urban America (Beacon Press, 1997), which was selected one of the top ten books of 1998 by the Village Voice; Three Strikes: Miners, Musicians, Salesgirls, and the Fighting Spirit of Labor’s Last Century, written collaboratively with Dana Frank and Howard Zinn (Beacon 2001); and Freedom Dreams: The Black Radical Imagination (Beacon Press, 2002). 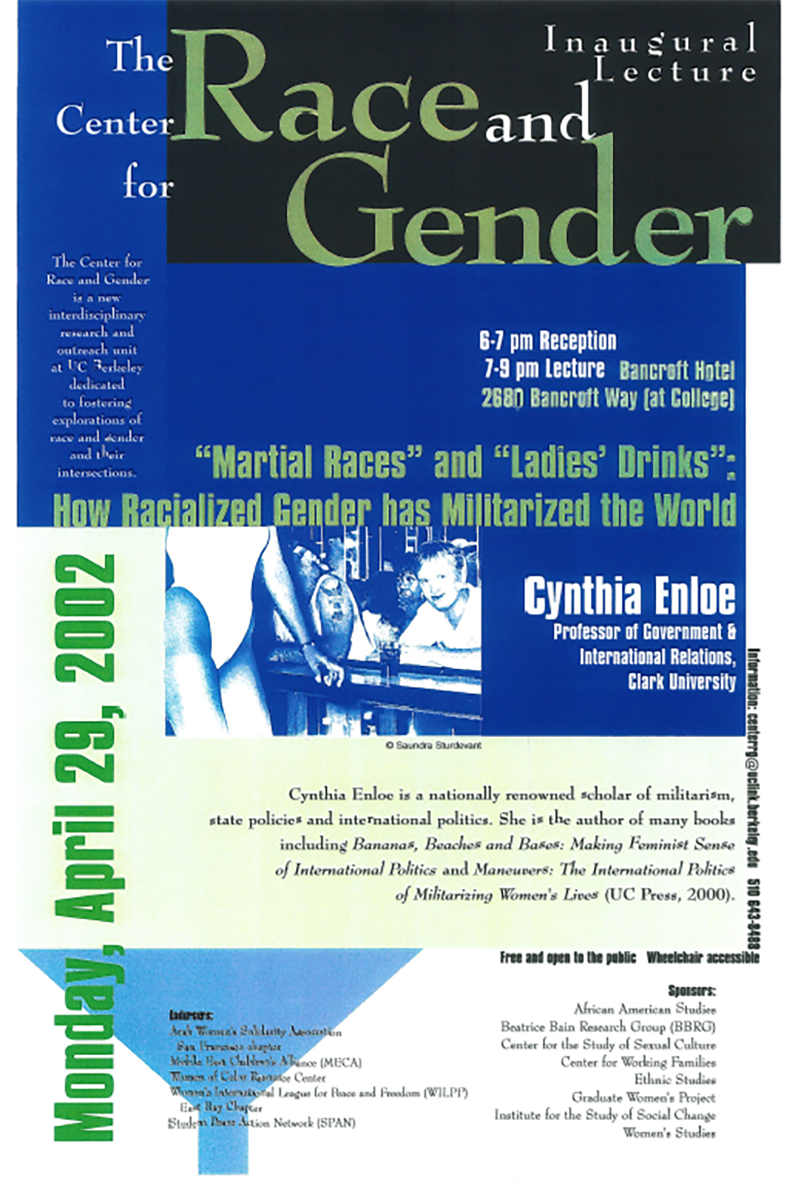 "“Martial Races” And “Ladies’ Drinks”: How Racialized Gender Has Militarized The World" with Cynthia Enloe

The Center for Race and Gender (CRG) is a new interdisciplinary research and outreach unit at UC Berkeley dedicated to fostering explorations of race, gender, and their intersections.